Developing the next generation of Indonesian leaders

In 2007, PT McKinsey Indonesia set an aspiration to “Unleash Indonesia” by helping the country achieve its economic and human potential. One of the core themes of the aspiration is the commitment to help develop the next generation of leaders in Indonesia. In the same year, the office began discussions on how to reach out to the country’s talented young people and help them become leaders. What started off as a casual discussion among young consultants at the McKinsey Indonesia office grew into a formal program supported by McKinsey Southeast Asia. In August 2008, PT McKinsey Indonesia launched Youth Leadership for Indonesia (later changed to Young Leaders for Indonesia), a program targeted at high performing third and final year students in the top Indonesian universities.

Young Leaders for Indonesia (YLI) is an intensive leadership development program derived from McKinsey’s leadership development work for its clients. The program uses interactive forums and fieldwork approach to enable the participants to apply their knowledge in appropriate field work projects sponsored by participating companies. The first YLI program was developed in consultation with the two top Indonesian universities: the University of Indonesia, and the Institute of Technology Bandung. From these schools, we selected our first 50 participants. The selection criterion consists of superior academic credentials, and leadership experience and problem solving ability as documented in the applicants’ English language essay.

Be a Part of
Young Leaders for Indonesia 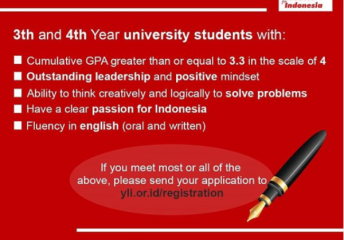 Get to Know – Young Leaders for Indonesia