Developing the next generation of Indonesian leaders

The Young Leaders for Indonesia Foundation was established in 2010. The Foundation is funded in part by McKinsey & Company, which also serves as the knowledge partner, and Indonesian companies as program partners. All believe in the values of the YLI program and share the vision of future leaders’ development as a critical underlying component supporting the growth of Indonesia.

Indonesia is a member of the G20, ranks as the 3rd largest democracy in the world, with 240 million people and rich natural resources; it has increasingly played an important role in the global stage. According to the report by McKinsey Global Institute (The archipelago economy: Unleashing Indonesia’s potential) Indonesia could become the 7th largest economy in the world by 2030. To realize Indonesia’s economic potential, the country has to address critical challenges including the projected shortage of 60 million skilled and semi-skilled workers in its labor force. The YLI Foundation believes that to help unleash Indonesia’s potential will require a growing cadre of world-class leaders with strong leadership skills, a global mindset, and knowledge of local culture and traditions. The Foundation is fully committed to address the need of talent and leadership development in Indonesia.

The YLI Foundation has expanded the program in order to deliver a scalable impact; it offers 2 programs which are run in a parallel annually: the YLI National Program and the YLI Regional Program. These programs support and develop the participants’ personal and professional skills over the course of 6-months. After graduating from the program, the participants become members of the YLI Community as they launch their respective personal leadership paths.

A key component in the continued development of these young leaders arises from the creation of a vibrant network across three generations of Indonesian leaders encompassing the Foundation patrons, board members, established leaders and the YLI program graduates. In addition, the Foundation has now initiated the YLI Faculty Network enabling select program graduates to participate directly in program delivery. This functions as a capacity building program for the alumni to be part of the YLI faculty, enabling them to give back to future program participants, and creating another leadership development opportunity for them.

Since 2014, the YLI Foundation has hosted two annual conferences bringing together all program alumni, the Foundation patrons and board members, and distinguished leaders from all sectors of Indonesia. The objectives of the annual conference are to expand the network established during the programs, and create a wider impact by the YLI community to make a difference and bring change in Indonesia.

Be a Part of
Young Leaders for Indonesia 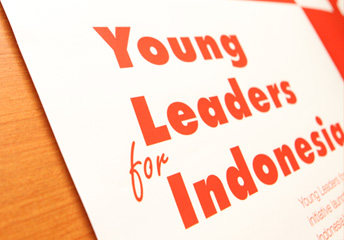 THE 2022 YLI NATIONAL PROGRAM IS BACK!

Get to Know – Young Leaders for Indonesia